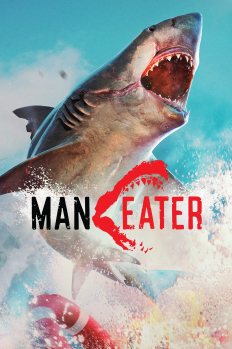 Oh-oh, here she comes
Watch out, boy, she'll chew you up
Advertisement:

Maneater is a 3D action-sandbox game developed by Tripwire Interactive, where you play as a man-eating shark and fight, kill, eat and evolve to become the apex predator you were born to be.

While filming a cable show about shark-hunting near the Gulf Coast city of Port Clovis, third-generation shark-hunter and captain of the Cajun Queen, "Scaly Pete" Pierre LeBlanc, hears about a man-eating female bull shark terrorizing a nearby beach. After seeing the shark kill the first responding hunters, Pete takes the shark down with a harpoon shot as she charges him. As he guts the day's catch, Pete sees the shark was pregnant with a female pup. After cutting the newborn to mark her so that he will remember her when she's worthy prey, the pup bites off one of his hands and is flung aside for her troubles.

And that is where your story begins.

The game released in May 2020 for the PC, Xbox One and PlayStation 4, with next-gen ports for the Xbox Series X|S and PlayStation 5 arriving following their launches in November. An Expansion Pack titled Truth Quest was released

, has no relation to this game (sadly), nor is it part of the game's soundtrack (such a missed opportunity!).