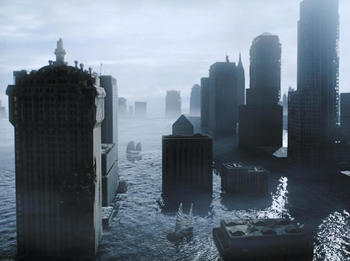 "Damn it, who kept the water running?!"
Advertisement:

One of the easiest ways to indicate that a major, Earth-changing event has taken place is to show a city half-sunken, with buildings at unsafe and possibly nausea-inducing cants. This is sometimes the result of a Green Aesop about Global Warming, but more often it's just used to show that something is not right in the story's setting. Given the natural fears that arise in an island nation, this happens to Japan a lot. These cities may be empty, abandoned ruins, but can often be seen draped in plant life or inhabited by Disaster Scavengers.

These cities are staples of Flooded Future Worlds. The quintessential example is, of course, Atlantis.

May be the result of California Collapse. For ancient examples see Underwater Ruins. Contrast Underwater City when they're still functional underwater.