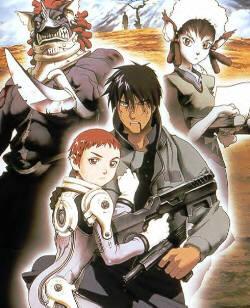 "A world of endless blue..."
Advertisement:

A four-episode anime, very loosely based on a manga by Satoru Ozawa. The story takes place after the apocalyptic flooding of Earth by Emperor Scientist Dr. Zorndyke. With the remaining cities ravaged by Zorndyke's army of fish-human hybrids - his "children" and intended heirs to the new world - the last hopes of humanity fall on the remaining submarine fleet, the eponymous No.6, and cadet-turned-slacker Tetsu Hayami.

Aired on Toonami back in its glory days. After Bandai Entertainment completely ceased DVD production, the rights are now in the hands of Discotek Media, who have so far re-released the series on DVD and Blu-Ray.

Also available are the video games Blue Submarine No. 6: Antarctica and Blue Submarine No. 6: Time & Tide, on the PlayStation and Sega Dreamcast, respectively. The former takes place during and after the events of the OVA, while the latter is a prequel that takes place a short time before the anime. While both games were only released in Japan, a fanmade English translation has been released.