No Export for You 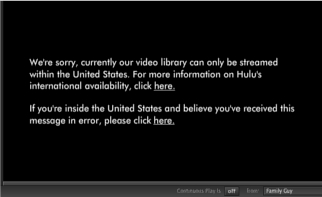 How dare you try to watch online from outside America!note Unless you're using a VPN to trick the service into thinking that you're streaming it within America...
"Somebody made a good Back to the Future game, and it was only in Japan? What the fuck is wrong with this fucking world?!!"
— The Angry Video Game Nerd
Advertisement:

Any work can be very well received in its country of origin without being famous elsewhere. Some franchises seem to churn out tons upon tons of merchandise and special content. Internationally, the majority of this stuff sees limited release, if any.

There are a few reasons why this may occur — the language barrier, lack of potential appeal to foreign audiences, licensing difficulties, cultural differences, or censorship — for more, see Analysis.

This is when any work was not released in a country even though there were good reasons to export it there. It has to meet at least one of the following conditions:

This is about media that's not exported for no obvious reason.

Because of the Internet, people have become far more aware of works from abroad, including obscure ones that aren't aimed at their country at all. But, just because a Vocal Minority believes something from abroad should be released for them, doesn't mean their country is a viable market. The distributors have to think of the money.

In this section, the following are not valid examples:

If there's little likelihood of strong market demand for a particular work, it is fair for a company not to export it to a foreign region. Movies made in Europe from the 1920s-'50s usually weren't released in the U.S., unless the starring actor/actress was a really big, recognizable name - Sophia Loren, say. Otherwise, the commercial release of said movie there wouldn't have been financially viable.

Still, with today's primary distribution point being online for music (iTunes, Amazon, Spotify), games (Steam), movies (Netflix), books (Amazon) and television (Hulu), you gotta wonder about the motivation behind regionally restricted release when manufacture and shipping costs simply don't apply. Plus, as is often cited in online discussions related to the issue, if consumers cannot obtain work via legal means - i.e. buying a ticket, purchasing a DVD or CD, or through subscribing to a streaming service or cable network - they will often turn to download and other methods, resulting in the producer of a work getting no revenue for it at all.

Nothing sucks more than a certain series you want to see translated not getting one. Sometimes even a Fan Translation can't help, since the company may throw a Fanwork Ban at you, stonewalling any translation attempt.

This may overlap with Region Coding, especially where DVDs, Blu-rays, gaming media, and web media is involved. May also invoke Screwed by the Network if it's only later seasons of a show that is not being exported and the show has been taken off the air in said markets where the show had been screwed, which may result in a case of Keep Circulating the Tapes.

Can lead to Sequel First or Marth Debuted in "Smash Bros.".

See also Bad Export for You for a less extreme, yet more insulting version; also No Dub for You if a title is released without a native dub track. Compare to Offer Void In Nebraska and Banned in China (which is essentially "No Import for You"). Also compare the Denial of Digital Distribution variety where the digital release is region-limited. See also Import Gaming for a way around this. Contrast Short Run in Peru, and Germans Love David Hasselhoff. For a possible subversion, see Late Export for You.