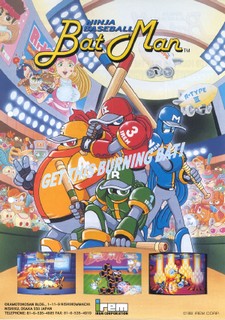 Batter Up!
"This is a special message about something that just changed my life. A game... called Ninja Baseball Bat Man. That is the best title ever conceived by a human being. Or an alien, or whoever, or whatever came up with this. [...] Does it live up to the title? It surpasses the title! [...] [The title] got me to play, and then hit me in the face with a grand-slam atomic bomb blast of video game goodness."
— The Angry Video Game Nerd saying something good about a video game for a change

A wacky arcade Beat 'em Up made by Irem in 1993. In this game, four baseball-themed ninja superheroes are hired by the commissioner of a baseball museum to retrieve a golden statue of Babe Ruth, as well as the statue's matching golden baseball equipment, when they're stolen by the evil Jado syndicate. They must travel all over the major cities of the USA to recover the pieces and assemble the statue so it can be returned safely.

A good game, underrated, and sometimes MAME can't quite handle it.

Has nothing to do with a certain Caped Crusader dressing up in ninja gear and playing baseball.