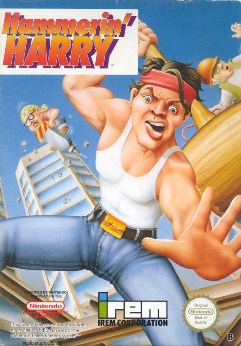 Daiku no Gen-san (大工の源さん, "Carpenter Gen"), known outside of Japan as Hammerin' Harry, is an arcade platformer series made by Irem.

The series is centered around Genzo Tamura, otherwise known as "Gen-san" or just "Gen" (or "Harry", if you're American). Gen is a hardworking, hammer-wielding carpenter from Beranme Town who fights against evil construction companies with designs on demolishing Gen's home and other such places to further their sinister goals. Gen's girlfriend, Kanna, usually gets caught up in the chaos, and often needs to be rescued by Gen whenever the company he's fighting at the time gets ahold of her.

The first game was made in 1990 and later ported on the NES a couple of years later. A few games on other Nintendo systems

(Game Boy and SNES) followed suit, as well as some pachinko machines. The series became more or less dormant until 2008, when a new installment called Hammerin' Hero was released for the PSP. This time, Gen wasn't limited to his carpenter job (despite the title). Instead, he was able to turn into various other jobs as new forms of attack.

The series isn't very well-known, but nowadays Flash renditions of the first arcade can be found all over the place.

Other tropes present in the series: