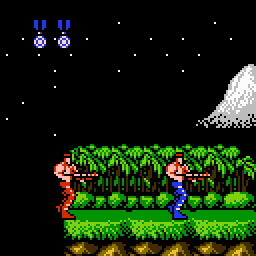 Player 1 is blue, and Player 2 is red. Get it? Got it. Good.
Advertisement:

Video game sprites or polygon models of different colors to tell otherwise identical Player Characters apart. This was especially prevalent in games up to the mid-1980s, where ROM size meant that even different sprites for them would take up too much space. In later years, storage capacity has grown bigger, allowing game designers to give each player character a different design, but this trope lives on as a way for players to tell each other apart when they are both playing as the same character.

In early days, certain players were forcibly assigned certain character colors with no way to choose a different color (ex: P1 blue, P2 red, P3 green, P4 yellow); this was most useful in arcades, where the preassigned colors were often painted onto the controls and/or the surrounding area of the cabinet. Nowadays, games will often allow players to choose colors.

This trope can apply whether the multiplayer is cooperative or competitive. It can also apply to a mirror match with a computer-controlled opponent as long as it is using the same character as the player.

In two-player games, you typically see Red and Blue; four-player games almost always add Yellow and Green. Red and Blue have historically been used, such as the red and blue corners in boxing, whereas the other two are included for Chromatic Arrangement.

SRPGs often do this with the generic classes.

Also, there can be some minor differences, as long as the color is the primary way to tell them apart.

A Sub-Trope of Color-Coded Characters and Palette Swap.

A Sister Trope to Mirror Match.