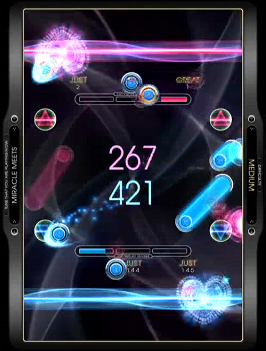 What if air hockey and beatmania had a baby?
REFLEC BEAT is one of Konami's BEMANI Rhythm Game series.
Advertisement:

The series is a little like Pong or air hockey with Rhythm Game elements: the game screen is laid out in vertical symmetry, with you on the bottom side and your opponent on the top. Circular objects travel towards a judgement line or one of 2-3 "top" targets on the player's end of the screen, and you must hit these objects as they reach the line or the targets. Gold-accented objects will reflect back towards the opponent's side, while black-accented ones will simply disappear. As the player hits objects, a "Just Reflec" gauge builds up; when one of its segments is full, the player can "flick" gold objects to perform a Just Reflec, causing the object to reflec back at a high speed and a wide angle, making it harder for the player to hit successfully. Hitting objects will increase score, while missing objects will decrease it. The player with the highest score at the end of the song wins. The game is simple to learn, but hard to master.

REFLEC BEAT has undergone four arcade installments in Japan, as well as a release for iOS devices both in Japan and overseas. The arcade version has you unlock songs, which requires an e-Amusement Pass, while the iOS version runs on a Freemium model; the game itself is free, but you only get three songs and obtaining more songs requires purchasing song packs.

Despite the game mechanics, a REFLEC BEAT cabinet is not actually a two-player cabinet; two linked cabinets are required to play local multiplayer. However, the iOS version allows two players facing each other to play multiplayer locally on a single device.

Games in the series
Arcade versions