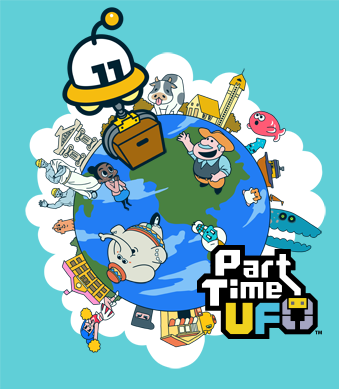 Part Time UFO is a physics-based puzzle game by HAL Egg, a mobile subsidiary of HAL Laboratory. The game stars a crane-equipped UFO taking on odd jobs around Earth.

As far as plots go, you play as Jobski, a little UFO that crashes onto an Earth farm by accident. Not wanting to leave the place a mess, it cleans up everything that got scattered from the impact, and the farmer's so impressed he introduces it to the concept of getting paid for a hard day's work. This inspires it to start looking for work while it's still on Earth and get used to life there.

The game is a score-based system with a time limit, where excellence in your jobs means higher pay. Gameplay relies on picking up various items and bringing them to a designated goal site. Much like real-life crane games, there are only two methods of input: a joystick to maneuver Jobski, and a button to make them pick up and drop items. Also like crane games, precise movements are necessary to get higher scores: each item you bring to the goal nets an extra 10 seconds, with an bonus added if the main mission is completed in time. All levels come with three additional missions to complete, typically involving stacking the items a certain way, collecting a certain item that may be hidden, or even making sure your stack doesn't topple over.

The game was released for smartphones in 2017. While it's a standalone title, Jobski would later make cameos in the BoxBoy! series as well as HAL Egg's second title Kame Sanpo.

On October 28, 2020, a Nintendo Direct Mini: Partner Showcase revealed a Nintendo Switch port of Part-Time UFO, released on the same day. The port enhances the game's performance and adds new features, including tougher versions of existing jobs, a "Feats of Glory" achievement system, co-op play, and the side modes Treasure Island and Tower of Infinity.