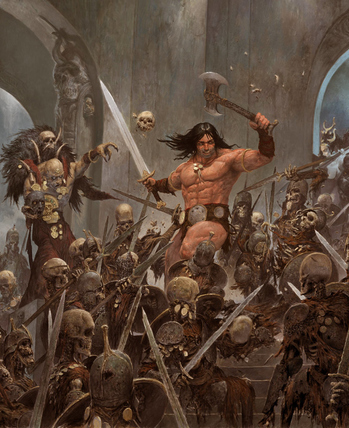 Grab your sword and fight the horde!
"I live in a world of fire and sand. The crimson sun scorches the life from anything that crawls or flies, and storms of sand scour the foliage from the barren ground. This is a land of blood and dust, where tribes of feral elves sweep out of the salt plains to plunder lonely caravans, mysterious singing winds call travelers to slow suffocation in the Sea of Silt, and selfish kings squander their subjects' lives building gaudy palaces and garish tombs. This bleak wasteland is Athas, and it is my home."
— The Wanderer, Dark Sun
Advertisement:

A subgenre of Heroic Fantasy, with which it is often lumped together, but having its own distinguishing characteristics. Coined by Fritz Leiber in the early '60s to define the style of his own works and those writers that inspired him, and to differentiate it from other works described as Heroic Fantasy, Sword & Sorcery is a genre of fantasy that is often considerably less glamorous and all about fast-paced action. Almost universally, Sword & Sorcery stories are about mighty warriors fighting supernatural horrors with blade in hand, either an Eldritch Abomination or Evil Sorcerer. Any political or criminal leaders are usually merely an Unwitting Pawn of a much darker power. Many victories will be by the skin of their teeth and usually won more through quick thinking and cleverness rather than physical might. There will be at least a few times where they cut their losses and bail on a fight, and they will have at least one Run or Die moment when they recognize that a threat is way out of their league. While they may have genuine allies here and there, they know better than to trust most people; as far as they are concerned, everyone they meet has a hidden dagger in their clutches until proven otherwise, and even then, they are usually still prepared for betrayal at some point.

Sword & Sorcery protagonists can usually be identified by three main traits, which separate them from most heroes from Heroic Fantasy:

Robert E. Howard is widely seen as the Trope Maker of the genre, with Fritz Leiber and Michael Moorcock being the Trope Codifiers a generation later. Many famous stories were first published in Pulp Magazines and short story anthologies are still a popular form of the genre.

If the heroes of a story are actually heroic and morally unambiguous, it's probably Heroic Fantasy. If there is only a low supernatural presence, it is most likely Low Fantasy. Can sometimes overlap with Dark Fantasy. See also Wuxia and Sword and Sandal, the Chinese and Bronze Age Mediterranean versions (respectively) of the genre, both with very strong overlaps.

Not to be confused with Sword and Sorcerer, which is a character duo trope.