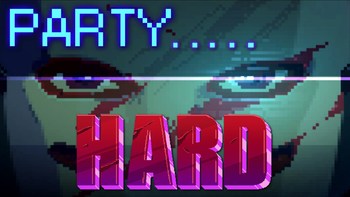 All I wanted was some peace and quiet...
Party Hard is a Stealth-Based Game that puts you in the shoes of a man who just wants to sleep... and deals with it by killing everyone he sees.
Advertisement:

Controlling the main character, an everyman who has been brought in for questioning by police, the player is tasked with killing each and every person at a variety of parties being held throughout the U.S., including a casino, dormitory, bus, biker bash and more.

Each level is filled with traps and environmental hazards the player can use to their advantage, including poisoned alcohol, samurai swords, smoke bombs and many other implements of destruction. However, it's not an easy task — kill someone in the line of sight of another partygoer, and they'll call the cops — or worse — on you.

Party Hard was released for PC on August 25th, 2015 and is developer Pinokl Games' first stealth title, and features several playable characters and semi-randomized events to keep players on their toes. An "After Party Update" was introduced on October 15, 2015, which added seven remixed levels from the main campaign. The game was also ported to PS4 and Xbox One on April 26, 2016, iOS devices on November 9th, 2016 and to Nintendo Switch on November 22nd, 2018.

On September 16, 2016, the game received a free DLC campaign, Dark Castle, a single level which takes place across multiple maps in which you play a vampire hunter attacking a party being held by vampires and other ghoulish ghoulies. Because the party-goers are creatures of the night, they'll actively attack you if they see you causing trouble instead of running off to call the cops.

On November 10, 2016, a new DLC campaign was added, High Crimes, which adds new gameplay mechanics and sees the Party Hard Killer engage in a vigilante war against drugs and government corruption.

A sequel called Party Hard 2 was released for PCs on October 25th, 2018. The game uses a new engine allowing for 3D environments while retaining the 16-bit art style and in-game physics. Taking influence from High Crimes, levels can be completed either by massacring everyone, or by killing specific targets and accomplishing objectives instead.