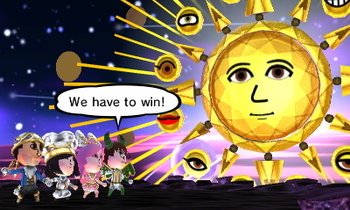 It's time to go to space, the final frontier! Nothing is bigger than space! Total big bang right there folks!

Yes, space trumps almost any other environment, so it's a natural place to give an ending some style. It doesn't have to be deep space, though: the moon will do, since it gives everyone something to stand on and is still pretty spacy, what with no atmosphere. Once everyone's gotten up there, all the space-related tropes apply, though since the action takes up a small portion of the overall runtime, don't expect to see the fruits of a lot of research.

Obviously this doesn't apply in settings that start out in space, or go there fairly early. The transition shouldn't happen any earlier than the third act. However, some series that start out by travelling to other worlds may have the climax take place in the vacuum of space itself.

In videogames, this can easily overlap with Amazing Technicolor Battlefield, and possibly with Final Boss, New Dimension. The finale might constitute a High-Altitude Battle.

This trope can be used by producers who are looking for a Finale Production Upgrade.

As this is an Ending Trope, unmarked spoilers abound. Beware.

The last level of Path of the Furon takes place on the Furon Homeworld.

The last level of Path of the Furon takes place on the Furon Homeworld.