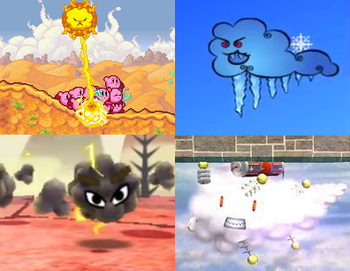 Clouds are masses of frozen crystals and condensed water that hover into the atmosphere. While sometimes nothing more than fluffy white masses decorating the sky, some can be rather dangerous, most notably the Cumulonimbus,

which are the bearer of heavy rains, lightning and hail. This is probably the reason why some works of fiction have introduced various living cloud enemies that make their best to make the heroes' lives miserable.

Such enemies typically attack with strong gusts of wind, ice and snow and lightning, and frequently appear in a Level in the Clouds, often with solid cloud platforms. Also, being Animate Inanimate Objects, expect them to have a face quite often. See also Elemental Embodiment. Many of them have to be solid in order for the heroes to attack them.