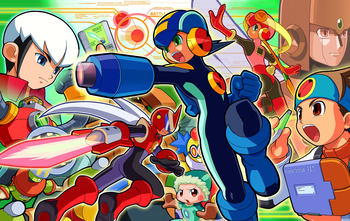 In the near future, everyone has a personal exploration terminal (PET) and a Net Navigator or NetNavi, an interactive AI assistant. The heroes are Lan Hikari and his Navi MegaMan.EXE. Together, they stop cyber crimes, eventually discovering a criminal syndicate named WWW (World Three).

This game completely ditches the previous Mega Man platformer gameplay and instead is an RPG. Battles are a mix of real-time and turn-based: MegaMan can move about a grid to line up attacks or dodge his opponents'. He can move and use basic MegaBuster attacks freely, while an Active Time Battle-esque timer dictates when Lan can upload Battle Chips that allow MegaMan to use special moves.

In 2009 the game would receive an updated port to the Nintendo DS called Rockman.EXE Operate Shooting Star, released only in Japan. Along with some quality-of-life improvements and slight gameplay rebalancing, this version features a new crossover scenario with Mega Man Star Force.