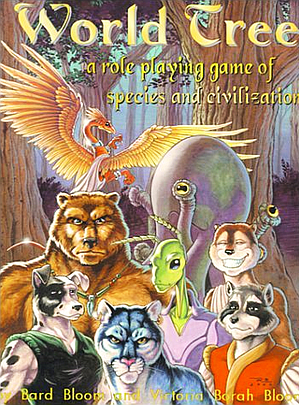 World Tree is a tabletop role-playing game set on a tree thousands of miles tall, whose branches are fifty miles wide and hundreds of thousands long. Eight "prime" species build a civilization with extremely widespread magic under the visible influence of nineteen seven-plus-twelve gods. Other intelligent races live in their shadow; the primes know that the world was created for the primes' benefit with the non-primes as part of the backdrop; some non-primes disagree. The world is very different from ours, from basic physics (no electromagnetism, no air pressure) to materials science (lots of wood, little metal; it's a tree), to cosmology (seven meddling gods visible in the night sky). The game focuses on adventurous primes who face monsters, intrigue and other parts of life on the Tree.

The prime races and the gods that created them include:
Common

The game exists as a paperback sourcebook and an in-game novel plus the semi-canon, in-character diary of "Sythyry" written by one of the authors (which inspired

The rules are largely skill-based, with most of what characters can do being summed up in their skills, together with ten stats and a point-buy attributes system. Magic is handled using an Arts system (similar to Ars Magica), with all magic made up of Nouns and Verbs combined in various ways. As the classic example, a fireball would use "create" and "fire".

For those interested, a rather good review can be found here