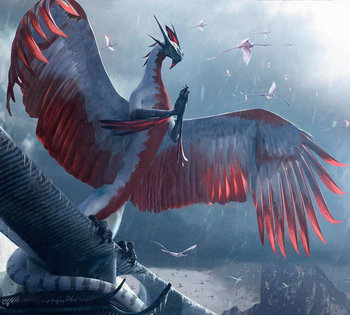 Dragons have changed a lot over history. From their origins as the giant snakes and serpents that guarded treasures and sacred places in Classical Mythology, they evolved into the monstrous images of Satan of Medieval myth, the fiery Tolkienian engines of destruction and the awe-inspiring godlike beasts of modern fiction. In recent fantasy art and fiction, some dragons are undergoing a new evolution — they're sprouting feathers.

In terms of physical appearance, such dragons can vary from typical dragons with birdlike wings to ones bearing additional tufts or crests of feathers at various points of their bodies. More comprehensive Mix-and-Match Critters may have more even distributions of draconic and avian features, and some may even be primarily avian creatures with secondary dragon traits.

There are, broadly speaking, three reasons for why a dragon might be depicted in such a manner:

See also Feathered Serpent, for another sort of feathered, reptilian beasts with their own cultural baggage (specifically, they call back to feathered serpent deities present in many Mesoamerican religions). See Dinosaurs Are Dragons for dragons and dinosaurs who are portrayed as related or interchangeable. See Catlike Dragons, for another portrayal of dragons with the characteristics of real-life animals. See Good Wings, Evil Wings. See Dragons Are Divine for dragons who are gods or like gods.