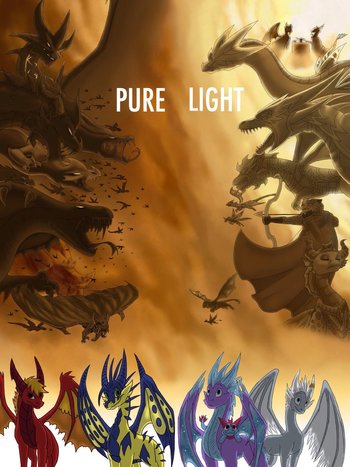 Pure Light is a The Legend of Spyro fan comic written and illustrated by Xannador, later taken over by Dragonoficeandfire, and currently drawn by Ruscsi .

The story is set a some decades after the end of Dawn of the Dragon, and the world has gone to hell. One year after Malefor's defeat at the hands of Spyro and Cynder, Spyro turned mad. Grievously wounding Cynder, and resurrecting Malefor, he went about creating an endless army of dark dragons, simple pawns existing only to serve the will of their dark masters, and conquered the shattered remains of the world. Now, only Warfang remains. Protected under a massive forcefield, the City of Dragons have become the last haven from the hellish, darker infested wasteland beyond its walls. Despite General Cynder's heroic efforts in hunting down the Dark Masters, however, hope is in short supply, and the Dark Masters need only sit by and wait for the city to tear itself apart from the inside. Meanwhile, a small group of young dragons have found friendship against all odds...

As mentioned earlier, the comic was originally created by Xannador

). Unfortunately, she decided to leave the project behind to pursue personal interests due to fandom drama. It was then taken over by one of the fandom's biggest contributors, DragonOfIceAndFire

. However, he called it quits after just a few pages. The comic is currently in the hands of awesome artist RusCSI

The comic in its entirety can be read on Smackjeeves here

New updates from chapter 3 page 29 can be read on RusCSI's deviantart.

The Wiki Rule is also in full effect here

A number of fan comics to the fan comic have been made, and most can be found on the Pure Light fan club on deviantart