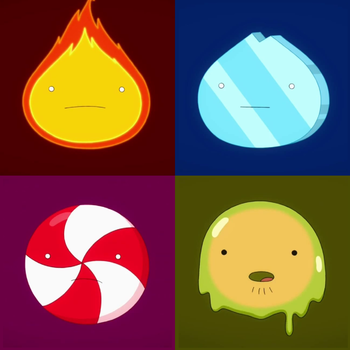 ...But everything changed when the Candy Nation attacked.
The range of elemental powers on display is pretty creative, although the word elemental is getting stretched... We're past all of your fire, lightning, and ice, granddad. The cool kids now use smoke, concrete, video, and neon, which admittedly is an element (points to neon on the Periodic Table).
— Zero Punctuation, Infamous Second Son review
Advertisement:

Everybody knows the Four-Element Ensemble: Earth, Fire, Air, and Water. Those elements are the basis of almost everything related to magic in almost any Fantasy setting. Throughout the years, some writers try to break the monotony by adding a fifth element to the mix, like Heart, Metal, Wood, and Lightning.note There are actual Chinese traditions in which the five elements are wood, fire, earth, metal, and water, and Indian systems which add "void", "space", "ether", or "sound" to the classic European four. But sometimes, it is just not enough. Bizarro Elements are Elemental Powers with a weirdness factor.

Instead of the aforementioned standard elements, the basis of a work's universe revolves around seemingly random and very unusual elements, like say "Banana", "Cookie Dough" or "Cement". They either form their new elemental ensemble or are added atop the traditional four. These bizarro elements aren't limited to magical usage, as they could be on an atomic level and, thus, compose part of the very fabric of the universe. They are mostly Played for Laughs, but are as often taken very seriously In-Universe.

To be considered a Bizarro Element, the element must truly be unconventional and rather unseen. Over the years, some Bizarro Elements became so widely accepted and popular that many "secondary elements" started to pop up here and there, becoming their own tropes. (For a more precise list of these "promoted" elements, see the "Other Elements" folder in Elemental Powers.)

For a similarly irreverent take on modern chemical elements, see Parodic Table of the Elements. Compare and contrast What Kind of Lame Power Is Heart, Anyway? and Heart Is an Awesome Power, depending on the situation. When used effectively, can be Lethal Harmless Powers.