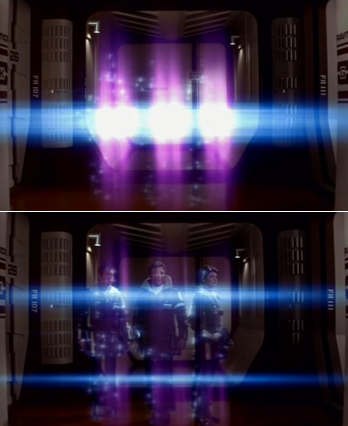 Teleportation could be stealthy, not featuring vacuum booms from the The Air Not There or using Instant Runes. It could be just utterly undetectable, except for someone disappearing and re-apppearing somewhere else.

However, that looks boring. In addition, it would give a massive edge to teleporters and make them harder to fight against, as they could swiftly change their locations and ambush their targets with ease.

To improve aesthetics and narration (and game balance), teleportation can be given audible or visual effects. They may happen upon activation of teleportation or upon arrival at the destination. Effects may include flashes of light, booms of vacuum, smoke screens, and similar phenomena.

It also gives the audience an audible or visual shorthand to show that teleportation indeed happened, making it clearer why the character moved from one place to another. For live-action TV and movies, flash effects also help cover any minor differences in the scene if the teleportation is being done via Stop Trick.

Sub-Trope of Teleportation with Drawbacks due to having a drawback in the area of "Stealth". The Opposite Trope to Stealthy Teleportation, for when disappearance is the only sign of teleportation.

Sometimes occurs with Weaponized Teleportation, if the effect is weaponizable.

Compare Cool Gate and Thinking Up Portals when it involves warp portals, and One to Million to One when it involves "breaking off and reassembling somewhere else". Compare Smoke Out when the characters use smoke to run away, giving the illusion that they "teleported".