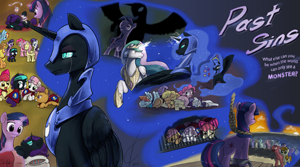 "What else can you be when the world can only see a monster?"
Advertisement:

is a My Little Pony: Friendship Is Magic fanfic written by Pen Stroke, with assistance from Batty Gloom. The final part was completed on Equestria Daily on the 30th of August and it has gone through 3 revisions to date. During a radio interview, Pen Stroke mentioned that the story would be revised/expanded to incorporate season 2 canon (and can be found here

), as well as the possibility of official side stories and short sequels (such as the In The Family series; details on that below). Also, an MST of the previously unseen, pre-revision version can be found here.

The MSTing has its own entry here.

There is also a series of recursive fanfictions by the name of RealityCheck's Nyxverse.

A film adaptation is in progress here

A comic adaptation is in progress; it begins here

Advertisement:
The sequel series, In The Family, deals with life after Nightmare Moon. It consists of three stories, Trinkets

. While Trinkets and Nightmare or Nyx? are one-shots, Winter Bells has multiple chapters.

Other than those, there's a prequel named First Hours

occurs after Tirek blows up the library.

This My Little Pony: Friendship Is Magic fanfic provides examples of: