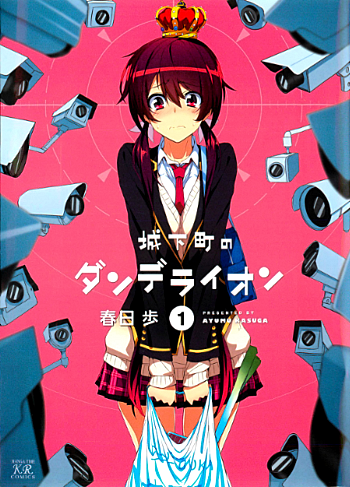 She seems to be enjoying it.
Advertisement:

Castle Town Dandelion (城下町のダンデライオン) is a 4koma comedy manga drawn and written by Ayumu Kasuga (known for the designs he drew for Gonna Be the Twin-Tail!! and Undefeated Bahamut Chronicle), and serialized in Manga Time Kirara Miracle! since 2012, and moving to Manga Time Kirara as of October 2017. An adaptation by Production IMSnote with Studio Comet and directed by Noriaki Akitaya aired during the Summer 2015 Anime season.

Akane Sakurada has an issue with being the center of attention. To put it simply, she doesn't like it. The thing is, it's hard to not be the focus of everyone's attention, when your father just happens to be the ruler of your country. And what's even worse, there's a seemingly endless number of security cameras strategically placed around the town, all set to follow your every move.

You'd think that Akane's life couldn't get any more difficult. You'd guess wrong. Because, seemingly on a whim, dear old Dad decided that upon her graduation three years from nownote In the anime, this is set at the time when big sis Aoi, Akane's big sister and the eldest child of the family, graduates, a year after the beginning. would be the time the country would decide who among the King's children would become the country's next ruler... through a popularity contest.

Fortunately, being part of the royal bloodline has certain... perks. Akane, and indeed all of her nine brothers and sisters, all have special powers. Except those same powers are now also going to be seen by the public as added appeal for each sibling once it's time to vote...

This series is licensed by Funimation in North America and received an English dub, making it the second Manga Time Kirara title to get an English dub from Funimation (the first being Three Leaves, Three Colors and its broadcast dub).