Insert Payment to Use 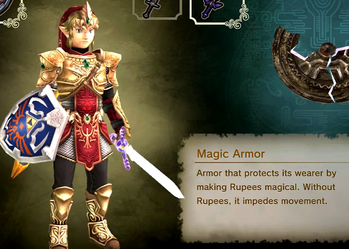 Ordinary weapons are pretty easy to use. Got a sword, slash with it. Got a gun? Point and shoot. But not this kind of weapon. This kind of weapon requires the user to offer up something in exchange for its use. (It could be Life Energy, an ally or anything of that sort.) This trope is popular in Video Games, as it allows the developers to create a way to limit usage of the more powerful weapons. (Especially Game Breakers.)

Note that this trope isn't exclusive to weapons- it can also apply to items, spells, abilities, or even Mons.

Compare and contrast sister trope Eye of Newt, which can overlap when the required ingredients are costly or painful to obtain, and can't be reused.

This trope can also overlap with the "cast from" tropes: Cast From Hitpoints, Cast from Lifespan, Cast from Sanity, and Cast from Money. (The last in particular covers more direct and literal uses of money, like using coins as ammunition, paying enemies to go away, or utilizing Practical Currency for its intended purpose.) If the payment is too exorbitant, it may result in the weapon/item/Mon being Awesome, but Impractical, and in extreme cases, the rarity of the required payment may mean It Only Works Once. Compare Powered by a Forsaken Child, and contrast Phlebotinum-Handling Requirements, where the magic carpet might not have a credit card slot, but only works if you're a left-handed mermaid.