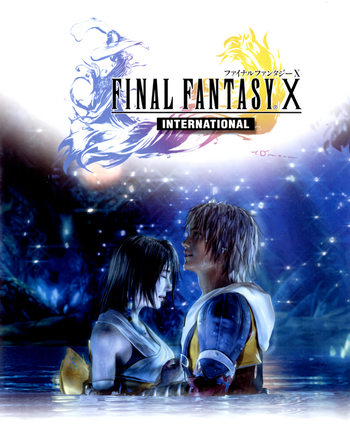 "Listen to my story. This... may be our last chance."
Advertisement:

The tenth game in the head-bangingly popular Final Fantasy series.

Final Fantasy X was the series' first foray into the sixth console generation—PlayStation 2, to be exact. Most remembered for being the first fully-voiced entry and for garnering then-obscure voice actor James Arnold Taylor some attention. Music was composed by Masashi Hamauzu, Nobuo Uematsu, and Junya Nakano, with arrangements from Shiro Hamaguchi and Hirosato Noda.

The plot opens in the Mega City of Zanarkand, where a cheerful sports star named Tidus is preparing for a game of blitzball, a sci-fi combination of rugby and water polo. No sooner has the game begun than a giant sphere of watery doom engulfs the city and reduces it to neon kindling.

In the ensuing chaos, Tidus is sucked into a portal and reawakens in the pre-industrial world of Spira. According to the locals, his home still exists in Spira, but as ruins: it was destroyed one thousand years previously.

Tidus soon learns of Sin, an invincible aquatic Goliath which attacked Zanarkand and now terrorizes Spira, bringing destruction without reason and keeping them locked in the dark ages. Only one method exists to defend against it: A ritual which allows a "summoner" to temporarily destroy Sin and grant the world a period of respite from its wrath (the "Calm") before its inevitable return. Finding himself smitten with a young summoner named Yuna and hoping to find a way back home, Tidus agrees to become one of her guardians and accompany her on her pilgrimage across Spira; a journey which ends in the holy ruins of Zanarkand.

X split from previous games in almost every way. Characters navigate a skill tree (Sphere Grid) by consuming Ability Points won in battle. Along the way, they activate nodes that award new skills or stat increases. X is very much a "class"-based game (White Mage, Samurai, Thief, etc.) until the end, when they break out and invade each others' Grids, which is more reminiscent of Pokémon "TMs" than shared abilities.

X departs from Active Time Battles in favor of a Combatant Cooldown System; it is the last Turn-Based Combat system in the franchise. The turn order is displayed in a corner, giving players as much time as they want to ponder their next action. More importantly, you can swap out any of your characters mid-battle; since the guardians always travel together, there's no need for characters to split up or spend the game cooling their heels in an airship. This is emphasized by enemy specialization; you are supposed to Attack Its Weak Point, and other attacks typically result in Cherry Tapping at best.

X takes a minimalist approach to equipment: You get a weapon and a gauntlet, and both come with attributes that a worn "Accessory" previously would. Some come with empty slots for further customization, provided you have the needed items.

Summons are no longer a glorified magic spell: "Aeons" are a clan of mons automatically join you during your travels, along with a few hidden ones Yuna can seek out. Each one functions as a playable character once summoned, complete with their own Hit Points, Limit Break, and spell list.

No modern FF is complete without mini-games, and X's were more time-intensive than ever; mainly unlocking and repairing the best weapons. The most famous of these, and certainly the most enjoyable, is Blitzball. After a certain event, each save point adds the option to put the story on hold and play a few matches. Each town has their own team and you can recruit those players, who roam the world as NPCs, when their contracts expire. There are a lot of free agents hiding in the game, too, so it pays to approach everybody to see if they play, similar to the card games of old.

Finally, it was the first Final Fantasy game to involve voice-acting. In addition to writing challenges — the programmers could no longer tweak dialogue at their leisure, since it now needed to be re-recorded — it created some chaos with FMV Cut Scenes, which were pre-rendered with Japanese Mouth Flaps. The growing pains showed in the final product, and the dub is considered to be of dubious quality.

X was successful enough to go against form and inspire a direct sequel, Final Fantasy X-2, which takes place two years after X and stars two of the three main female characters from that game.

The plot is noticably similar to that of an earlier Squaresoft title, Bahamut Lagoon, which is lampshaded by X's Global Airship: the Fahrenheit (though it is never explicitly named in either game.) The airship in Bahamut Lagoon is also called Fahrenheit. What's more, the airship used throughout X-2 is named the Celsius.

The PAL or "International" version of the game included more Bonus Bosses to fight, along with an "Expert" mode with a new Sphere Grid: there are fewer nodes and everybody starts out close to each other. It provides an early opportunity to mold characters Final Fantasy II-style, and isn't hard to use if you know what you're doing, but a beginner will wander around aimlessly without a goal in mind. HD ports of the game and its sequel were released for the PlayStation 3 and Vita in 2014; the production team used character models made from scratch instead of simply upscaling the old ones. A PlayStation 4 version was released on May 12, 2015: this release gives players a choice between the newly-rearranged soundtrack (which not everyone was wild about) and the original soundtrack. The compilation was then brought to Steam in May 2016. Finally, ports to the Nintendo Switch and Xbox One were released on April 11, 2019 in Japan and Asia and April 16, 2019 elsewhere.

You Can't Run From Your Fate

In "Final Fantasy X (HD Remaster)," player characters can sometimes use the Trigger Command "Talk" to prompt a conversation with a boss. In the boss battle with Seymour Omnis on Mt. Gagazet, using this with Yuna has him ask if she truly wants to heal Spira's sorrow and suggest that she just let death carry her away. But Yuna tells him that he's the one who can't fight his fate. Choosing to have this conversation takes up a turn, but triggers a boost to Yuna's Magic Defense stat which lasts for the duration of the battle.

You Can't Run From Your Fate

In "Final Fantasy X (HD Remaster)," player characters can sometimes use the Trigger Command "Talk" to prompt a conversation with a boss. In the boss battle with Seymour Omnis on Mt. Gagazet, using this with Yuna has him ask if she truly wants to heal Spira's sorrow and suggest that she just let death carry her away. But Yuna tells him that he's the one who can't fight his fate. Choosing to have this conversation takes up a turn, but triggers a boost to Yuna's Magic Defense stat which lasts for the duration of the battle.