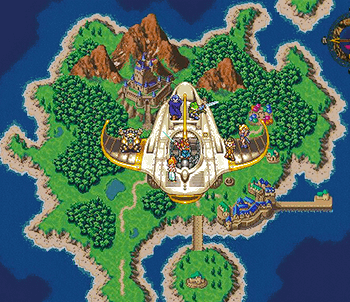 I'm looking to the sky to save me
Looking for a sign of life
"If we had a vehicle like this at the beginning of the story, we would be too mobile. Seafaring vehicles belong in the middle. Flying vehicles—at the end. It's common practice."
— Nyarko, Nyaruko: Crawling with Love!
Advertisement:

Mode of transport late in the Action-Adventure and Role-Playing Game genres that allows you to travel to nearly any location on the world map fairly quickly. This is almost always something that flies. Often, it's far beyond the Technology Level of the rest of the world, having been created by the resident Mad Scientist, or taken from an ancient civilization. Not to be confused with airships found in Real Life.

This is usually awarded after you've visited every part of the map in the course of the plot except The Very Definitely Final Dungeon (which often cannot be reached other than by airship, as such dungeons tend to be located in very out-of-the-way locations). It allows the player to quickly access unfinished sidequests while avoiding the tedium of Random Encounters and the maze-like terrain of the map. Airship acquisition may also open up many hours worth of sidequests.

May fall under Cool Airship.

Despite the trope name, it need not be an actual airship; it can also be some other kind of flying vehicle such as an airplane or helicopter or even a spacecraft if the game involves traveling between planets. It could even be an animal used as a mount, in which case it will probably be a Horse of a Different Color.