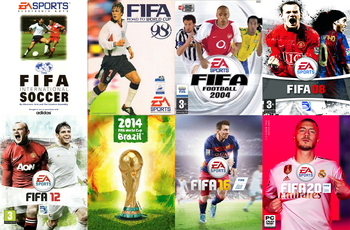 We are FIFA.note Top row: The first game (FIFA International Soccer), 98, 2004 and 08. Bottom row: 12, 2014 World Cup, 16 and 20.
Game after game after game, I realize now what's most important in my life: football. Show me something more thrilling than a perfect volley. Tell me you've never dreamt the immaculate strike, taking part in a moment when an entire nation holds its breath. Tell me that football is not our one common language, when the whole planet stops for 90 minutes to be witness to that one thing we all understand. Yeah, you can tell me I'm wrong. Some may say it's just a game. But this is about heroes and tribes, loyalty and devotion. It's our commitment and our passion, our battle and our belief; this is our faith. Now, feel the fever of the crowd, hear the roar of the faithful. You are Ronaldinho, you are Wayne Rooney. This is the beautiful game. This is your moment.
—FIFA 06 intro speech
Advertisement:

Another franchise of Sports Games from EA Sports and one of the most popular worldwide, alongside Madden NFL.

FIFA, also called FIFA Soccer or FIFA Football, is the first soccer game series to get a FIFA license. Being one of the few games (if not the only game) with licenses from various soccer leagues in the world, the game enjoys a wide selection of teams from the most prestigious to the downright obscure. The series is also known for giving its games soundtracks consisting of an eclectic, varied collection of Awesome Music.

The series has come a long way from its first installment FIFA International Soccer ("FIFA 94", even though it was originally released in 1993) which boasted a unique isometric view compared to the standard top down or side views of its competition. In a few years FIFA soon established itself as a major force in sports videogames and amassed a dedicated following that continues to grow to this day.

Euro Footy is the main focal point of the games. Not only the gameplay is generally modeled after a mixture of the main playing styles of Europe, also a massive majority of the teams are from there. They even had license from UEFA to produce their UEFA Champions League spinoff before Konami bought it from them (until 2018, when their contract expired, allowing FIFA 19 to officially feature the competition). It must be noted, however, that the developers have made a genuine effort in later years to bring in more leagues from around the world, resulting in a game that gets more and more diverse every time.

Over the course of its history, FIFA has had missteps. This was due in small part to stagnation having been around so long, and the series' early foray into next-generation physics. However, recent entries have proven very successful among fans and critics alike, thanks to the devs spending real quality time polishing the game rather than just tacking on new features. Over the last several years, FIFA has created such momentum with its fanbase, that it is now the best-selling sports series in the world, as well as one of the best-reviewed.

In addition to the yearly releases of the game, there are special edition games for soccer events which vary from the FIFA World Cup to the European Championship which serves as the Licensed Game of said tournaments.

announcing that the series will be renamed EA Sports FC.