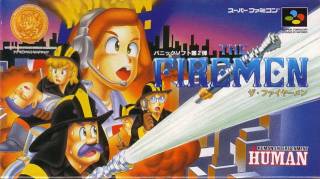 The Firemen is a game developed by Human Entertainment and released in 1994 for the SNES in Japan and Europe. It was never released in the US despite the fact that the European version is already in English.
Advertisement:

On Christmas Day 2010 the Metrotech Chemical Company building is engulfed in flames and it's up to Pete and Danny as well as the rest of the D-sector fire brigade to advance up through each floor, putting out fires, rescuing survivors, and dealing with rogue security robots along the way.

The game plays as an isometric shooter in which you must go through each level and destroy or avoid fire and other obstacles, complete objectives, and defeat the boss at the end of each stage.

It was followed by the sequel, The Firemen 2: Pete & Danny, on the PlayStation in 1995.

The Firemen Contains examples of