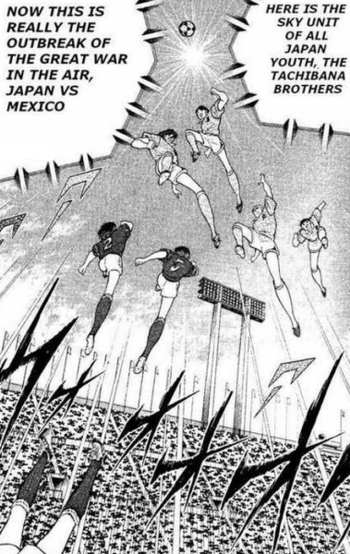 Taking "football" to a whole new level.
In Real Life, sports are not so entertaining as it seems. Top-class players may have different styles among them, but that's all. The sport mainly works in terms of either My Kung Fu Is Stronger Than Yours or strategic play, or team play, or all three.
Advertisement:

In fiction, however, especially if the whole plot is about a certain sport that exists in Real Life, expect it to become Mundane Made Awesome. The characters will have some special moves somehow reflecting to their characteristics, being improbably awesome while defying physics and common sense. If the sport involves a ball that doesn't break while using these moves, you'll wonder what that ball is made of in order to survive all kinds of overkilling shoots done to the ball. These skills has power proportional to one's will, so expect the protagonists to beat much stronger opponents by David Versus Goliath very frequently.

Appears a lot in Shōnen anime or comic. Fighting Series involve this a lot, since fighting is a sport if rules are enforced. Usually paired with Tournament Arc. Involves a lot of Calling Your Attacks, and There Is No Kill Like Overkill (at least in relation to what they actually needed to do). Can be easily justified if the player are using their superpowers to play sports.

Compare Fictional Sport, where in this trope it's about players who plays a Real Life, mundane sport using improbable skills, and compare Blood Sport, where in this trope the sport itself isn't deadly; it's the players who hold deadly sport skills. Also compare Martial Arts and Crafts. See also I Know Madden Kombat, the inverse of this trope (using non-combat sport skills in combat situations); and Muggle Sports, Super Athletes, when the skills come from superpowers.