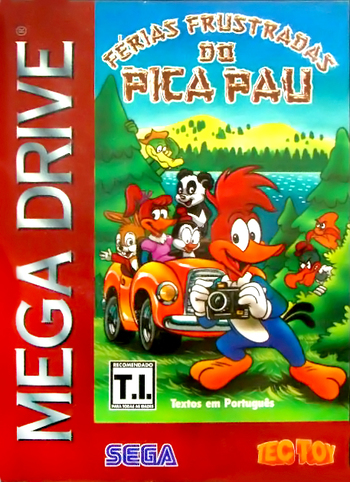 So Woody Woodpecker is on a vacation with his friends and family... and didn't invite Buzz Buzzard too? How dare him! He must pay! Woody's Rogues Gallery capture all of his friends and leave a letter which tells of how much they'll suffer for his atrocious actions. Is Woody a bad enough woodpecker to go and save them?

Férias Frustradas do Pica-Pau, or in good English, Woody Woodpecker's Frustrated Vacation, is a Platform Game for the Mega Drive and Sega Master System made in 1995 by Tec Toy, which distributed Sega consoles and games in Brazil at the time. The production of the game was troubled - it took about 4 years to be finished. The final product ended up being poorly received overall, with complaints of simple graphics and terrible controls.