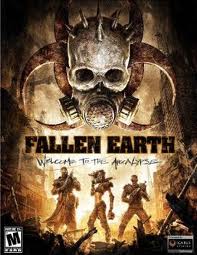 Welcome To The Apocalypse. Would you like spikes with that?
Advertisement:

Fallen Earth is a Post Apocalyptic sandbox MMO, released by North Carolina developers Icarus Studios in 2009 and set in the surroundings of the Grand Canyon. The year is 2156 and the Earth has been devastated by nuclear warfare and a biological catastrophe. Fallen Earth's gameplay is an FPS/RPG hybrid; players have characters with stats which they can increase and which effect their in-game capabilities, but combat requires a player to use an FPS-style crosshair and manual aiming rather than the more typical "select target, select attack" methodology of many MMOs. Fallen Earth was purchased by Gamers First in mid-2011 and shortly after this was moved to a Free To Play model. On October 2019, the servers were shut down and the game was said to be getting a reboot.

Fallen Earth has a crafting system which is central to it; virtually anything a character can use can be crafted by the player(s), from the shirt they wear to the bullets and weapons they use. It's also a sandbox with no character classes and the players are free to choose where to go, who to align with and how to progress their character. The game did provide a few 'archetypes' such as Medic, Rifleman, Melee and guidelines on how best to develop skills to fit them. This feature was removed when Fallen Earth went FreeToPlay.