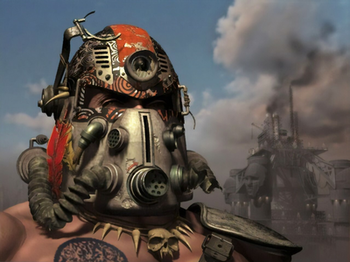 That used to be a perfectly good suit of Powered Armor.
"It seems the first thing everyone does after the bomb hits is strap every random animal skull and piece of kitchenware to their leather singlets."
— Zero Punctuation doing a Rage (2011) review

So, your whole world has gone down the swirly waters of the porcelain throne, eh? That's a bummer!

You'll probably miss the clean underwear most of all. Yes, The Apunkalypse has long since come and gone, society has crumbled (or been blasted to smithereens by nuclear war, meteorites, unfriendly aliens and/or the Wrath of God), the tailors were the first to die, there's nary a McDonald's, Wal-Mart or Hostess cupcake factory left standing and tribal punks roam the wasteland.

What's a Disaster Scavenger to do? Improvise! Necessity is the mother of invention in Scavenger World, After the End.

Need to protect your noggin? Raid the wreckage of the local football stadium. There should be helmets lying around every seven feet or so. If you're not careful you might just trip over one or three.

Whilst food, water, shaving cream, and deodorant will be scarce commodities, fetching a king's ransom for those lucky enough to scavenge some up, there will always be a surplus of used sporting equipment, police riot gear (sorry, no weapons), and used car parts lying around from which to fashion the latest low-tech ensemble with which to protect yourself from the elements, wildlife, and your fellow man. If you're planning on teaming up with the baddies, since they have all the cool toys, don't forget to cobble a few spikes onto your outfit as well.

After The Apunkalypse, nobody will judge your garish fashion choices or lack of personal hygiene, because frankly everyone will use and wear the same recycled remnants of a communal bygone era.

Taken to certain extremes, this may result in outfits that are Awesome, but Impractical or even Scavenged Punk. Chainmail Bikini is fairly common for both genders, indicating that civilized notions of modesty have also gone out the window.

A Sub-Trope of Improvised Armour, and a Sister Trope to Post Apocalyptic Gasmask.