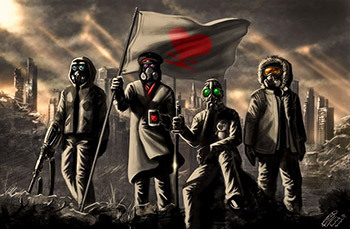 Now you can breathe as long as you don't inhale.
Advertisement:

For reasons that are not quite clear, if there's one item that seems to have become visual shorthand for post-apocalyptic settings, it's the gas mask (part or not of a Hazmat Suit). Generally this is due to the air being poisoned in some waynote (which leads to Fridge Logic if you think about it too much; in real life, poisoned air never lasts that long, and if it does, it might involve things where a gas mask wouldn't be sufficient, not to mention the fact that cartridges will not cover all hazardous substances in the air, will reach the end of their service lives fairly quickly under heavy exposure, and will likely be in short supply if any restocks are even available), although there are occasional cases where the masks are present for no obvious reason. Although for some people, it's better to be safe rather than be sorry. They are wandering round after an apocalypse with the only protection being their own oxygen supply.

Pretty much every post-apocalyptic short film on the internet does this.