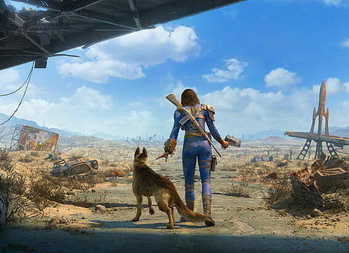 Well, the whole world is falling apart and it's starting to look like the end of the line for mankind, so man's best friend will naturally be along for the ride. Dogs are everywhere in apocalyptic and post-apocalyptic fiction, but you have to be careful: they can turn out to be your new best friend or your new worst enemy. Sure, even when the going gets tough and food is scarce, the Post-Apocalyptic Dog often stays on as a faithful Canine Companion, but who knows how long that will last when we're worried about other people eating us?
Advertisement:

Now, some dogs will rise to the challenge and, say, singlehandedly defend their owners from a marauding gang, and having an Evil-Detecting Dog outside your bunker will alert you to marauders, but sometimes the family pet will remember that, deep down, it's always been a wolf, and then turn into a Super-Persistent Predator or a Hellhound. Oftentimes, villains are a lot likelier to have dogs, since dogs are savage predators that are loyal to each other, as well as formidable scavengers against sane people, and dogs and villains are just fit, making a Post-Apocalyptic Dog a perfect Canine Companion for a Card-Carrying Villain. We fear Savage Wolves and Hellhounds, and, after the end of the world, our heroes will sometimes have to fight off a whole pack of Post-Apocalyptic Dogs that used to be friendly neighborhood mutts, a Diabolical Mastermind's Right Hand Attack Dogs, or villainous dogs from hell.

Whatever the situation, the Post-Apocalyptic Dog is often a major touchstone of morality after the apocalypse, for the dogs and for ourselves. For example, let's just hope that their straitened circumstances never force our heroes to contemplate eating their trusty hound...

Not to be confused with Apocalyptic Log. See also A Boy and His X, Evil-Detecting Dog, Heroes Love Dogs, Right-Hand Attack Dog and Hellhound.