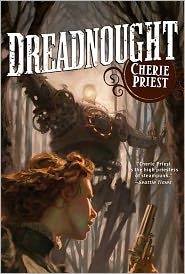 The Clockwork Century is an Alternate History created by Cherie Priest, in which the The American Civil War has raged for nearly two decades thanks to Steampunk and Diesel Punk technology. Oh, and there are also zombies.

Cherie Priest created the series as a literary magnum opus for Steampunk fans. So far she has written six novels; Boneshaker, Dreadnought, Clementine, Ganymede, The Inexplicables and Fiddlehead, and a novelette Tanglefoot which can be read on-line

Boneshaker is set in 1880 Seattle, which has been walled off after a Deadly Gas was released from underground by Dr. Leviticus Blue, inventor of the eponymous Drill Tank, who then vanished under highly-suspicious circumstances. His son Ezekiel Wilkes enters the poisoned city in search of evidence that will clear the family name, and his mother Briar pursues to get him back — both find themselves in peril from Seattle's undead inhabitants, and a sinister figure calling himself Dr. Minnerich. Who may well be Zeke's Disappeared Dad.

In Dreadnought 'Mercy' Lynch is a nurse in a war hospital in Richmond. After receiving a telegram that her own Disappeared Dad is dying and wants to see her, she sets forth on a perilous journey across the war-torn states, eventually ending up on the titular Union armored train with a mysterious cargo that the Confederates are desperate to intercept. Not to be confused with the Mary Sue-tiful Star Trek novel Dreadnought!

Clementine focuses on Maria Isabella Boyd, a former Confederate spy whose fame has made her unsuitable for spy work. She finally finds employment with the pro-Union Pinkerton Detective Agency and is given an assignment from the Union government. A Union airship, the Clementine, is transporting needed military supplies and is being pursued by Croggon Beauregard Hainey, a freed slave and known pirate. Maria's job is to stop him.

Ganymede centers on Andan Cly, an airship pirate who is contacted his ex-lover prostitute Josephine Early and asked to come to New Orleans. She tells him about the submersible war machine Ganymede, which is hidden at the bottom of Lake Ponchartrain. If Cly can sneak it past Southern forces, it could end the war. Unfortunately, nobody knows how to operate it and anyone who has ever tried has wound up dead.

The Inexplicables returns us to Seattle and could be regarded as somewhat of a direct sequel to Boneshaker. It follows the adventures of Zeke's friend, Rector Sherman. Believing that Zeke is dead and that he is responsible for his death, Rector is driven by guilt to enter the blighted Seattle. Except this time, there are more than just rotters in the walled-off city; the eponymous Inexplicables are lumbering beasts that now roam the place, and nobody knows what they actually are.

Fiddlehead brings us to the final book of the Clockwork Century series, in which a great computing engine designed by young ex-slave Gideon Bardsley brings the rotter problem to full light, and how if the war between the north and the south doesn't stop at once, there may not be a country left. However, some are trying to stop his information from coming to light, and Pinkerton agent Maria “Belle” Boyd is brought in to find out who, and how to stop them.