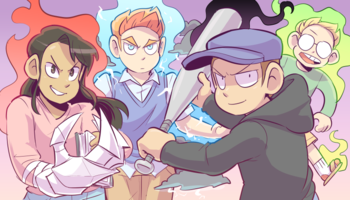 is a supernatural humor Webcomic made by Zack Morrison, a.k.a. MidnightTelevision.

It stars a cynical young lad named Maxwell Puckett who just moved into a town called Mayview with his eccentric father and little sister Zoey. It soon turns out that the town is haunted by ghosts and other supernatural creatures, which only a handful of people, Max included, can see. The comic derives a lot of humor from ludicrous wordplay, self-deprecation, and its parodying of common Anime tropes.

After a hectic first day of school, Max finds himself joining the (Paranatural) Activity Club, whose purpose is to keep paranormal activity around the school in check, and to help young spectrals like Max understand and control their powers. Mostly they just mess around though.

The comic updates once a week on Fridays as of March 4, 2019, due to the author's chronic wrist injury. As of September 24, 2021, updates are in prose with small illustrations instead of a full comic.

A fan-made, fan-operated forum for the comic can be found here

. The comic was first hosted on ComicFury, and later on Hiveworks. Voxus has a let's read of the first chapter here.