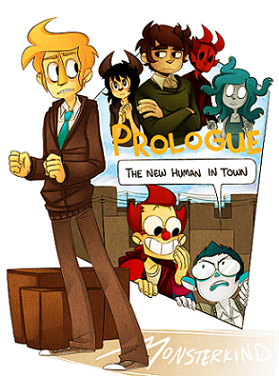 is a story about humans and monsters living in a city ruled by segregation and inequality. Monsters are treated as second class citizens, and are not allowed in certain areas of the city— especially those inhabited by wealthier humans.

Wallace Foster is a human who has just been transferred into District C of Fairway City. He has never lived among monsters until now, but he's quickly realizing that they aren't as bad as everyone has made them out to be.

Change and progression have never come easy in this backwards city, but perhaps Wallace can help close the gap between human and monsterkind and bring the two together in harmony. He'll at least try.

First page can be found here