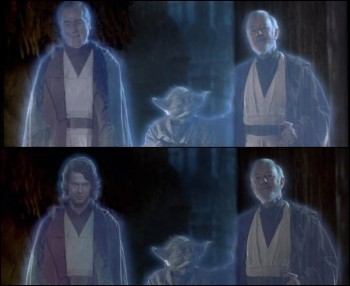 When a Retcon is performed by going back and changing the original work, so that subsequent printings of "the same" work are actually different.

This may happen as the result of deciding after that fact that something had Unfortunate Implications, was Dude, Not Funny!, or needed to be Distanced from Current Events, but could also be caused by Flip-Flop of God, Science Marches On, or being Screwed by the Lawyers. Like many tropes, this can be for good or for evil.

This one is a prime source of Adaptation Displacement for more recent fans. It may lead to a Limited Special Collector's Ultimate Edition, Updated Re-release, George Lucas Altered Version, Broken Base, and Creator Backlash, especially if the original version is taken off the shelves.

Named after George Orwell: in his novel 1984, the main character's job at the Ministry of Truth is to rewrite old newspaper articles to hide the government's flip-flopping on political issues. Contrast Death of the Author, Canon Discontinuity. Related to Early-Bird Cameo, where an adaptation or remake of a work puts in extra early Foreshadowing for later plot developments. Compare Flashback with the Other Darrin.

See Written by the Winners and its subtrope Internal Retcon for In-Universe examples.