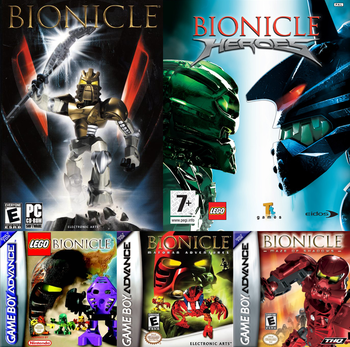 To promote the LEGO BIONICLE toyline, a number of Licensed Game adaptations were released during its run.

The first BIONICLE game was Quest for the Toa, released for the Game Boy Advance in 2001. In this game, a Matoran embarks on a quest to rescue the kidnapped Turaga and bring the Toa Stones to Kini-Nui, where they will summon the Toa Mata. This game marks the debut of the recurring character Takua, who is the default canon protagonist of the game; however, the game gives players the option to customize their Matoran's colors. It was originally titled Tales of the Tohunga, but after a letter of complaint against the LEGO Group for appropriation of Māori words and culture, its title was changed to Quest for the Toa or simply LEGO BIONICLE in later releases.

Later that same year, The Legend of Mata Nui was intended to be released on PC. As a direct follow-up to Quest for the Toa, this game would have starred the six Toa Mata as playable characters as they traveled across the island of Mata Nui in search of the Kanohi masks, eventually teaming up in the Mangaia to confront Makuta. Unfortunately, development was riddled with major bugs that were unable to be solved before the projected release date, prompting LEGO to quietly cancel the game; many of its story elements eventually worked their way into other media, such as Mata Nui Online Game. An anonymous source known as "Deep Brick" recorded footage of a beta build of the game, which was uploaded to MarkOfMoD's YouTube channel

in 2010. In 2018, an earlier alpha build of the game was uploaded onto the BioMedia Project by another anonymous source; a few months later, the last known beta build of the game surfaced as well. Game History Secrets extensively covered the game's history in a video here

2002 saw the release of Matoran Adventures for the Game Boy Advance. This game is a sidescrolling platformer starring Kongu (although other Matoran could be unlocked for subsequent playthroughs) as he teams up with the Turaga to defeat the Bohrok. This was the first non-canonical BIONICLE game.

In 2003, BIONICLE saw its first major multi-platform release with BIONICLE: The Game. This Action-Adventure game summarizes the events of the 2002 and 2003 BIONICLE storylines, with the Toa Mata (later transformed into the Toa Nuva) battling Bohrok, Bohrok-Kal, and Rahkshi while Takua searches for the seventh Toa who can defeat Makuta. A sequel was planned for release in 2004 titled BIONICLE 2: City of Legends to tie in with the release of the Direct to Video BIONICLE 2: Legends of Metru Nui, although this was canceled early into development.

2005 returned to the Game Boy Advance roots of BIONICLE videogames with Maze of Shadows, an adaptation of the book of the same name. Unlike its predecessors, this game is a Turn-Based Combat Role-Playing Game. Much like the book, Maze of Shadows stars the Toa Metru as they explore the subterranean tunnels of Makuta's lair, seeking a source of Energized Protodermis to give to the Karzahni plant in exchange for an antidote to save Nokama's life.

In 2006, BIONICLE saw another major multi-platform release: BIONICLE Heroes, developed by Traveller's Tales, who had previously worked with LEGO on the massively-successful LEGO Star Wars games. BIONICLE Heroes is a very loose adaptation of the 2006 storyline, starring the Toa Inika as they battle the Piraka to obtain the Kanohi Ignika and save Voya Nui. The PC and console versions are a Third-Person Shooter, while the Game Boy Advance version uses a Three-Quarters View camera angle and the Nintendo DS version is a First-Person Shooter (notable for being the only LEGO game to receive a T rating).