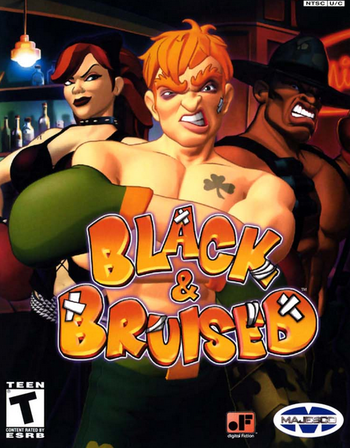 Black & Bruised is a cel-shaded, arcade-style boxing game released in 2003 for the Nintendo GameCube and Playstation 2. It was created by company Digital Fiction and published by Majesco. The game is known for having a cast of quirky characters, cel-shaded graphics, comedic dialogue, power-ups and a Nintendo Hard story mode for each of the characters in the game.
Advertisement:

Black & Bruised didn't receive much success when it was first released, as no new entry in the series has been released since then, but those that enjoy the game think that it's worth at least checking out should it be found.