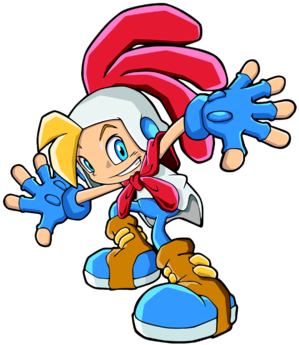 A playful little title from Sonic Team and published by Sega in 2003 with the most cheerful mood ever. It's about four kids that go to "Morning Land," a magical land that's inhabited by the Chicken People. They need help. In order to help these little chicks, the four don the magical Legendary Chicken Suits and command eggs in order to take down the Big Bad with the help of cute little mon-like creatures by your side to whoop some booty.

Sounds cute, at least before you take into account the massive amount of possibly traumatic material. The Big Bad and his cronies? Crows who want to take over the world by causing endless night. None of this sounds threatening, but boss fights bring a whole new level of creepy. Most of these bosses, and some notable levels, are also much harder than most people would have a right to expect from such a child-friendly setting.

The mission-style layout is sort of a Shout-Out to the Adventure games from the Sonic franchise with the gameplay focusing more on fighting than speed. It got mixed reviews (well, more like mixed-to-positive) from the gaming community, but the Sonic community liked the game.

Has nothing to do with Abby Hatcher or Teri Hatcher.