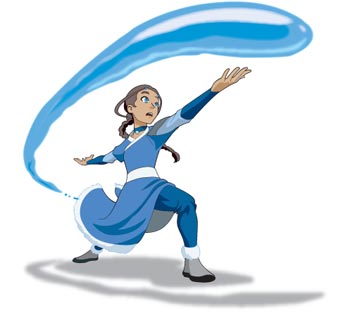 It even matches her outfit. And her eyes!
Dean: Everyone knows the sea is blue. Ask anyone.
Ridcully: That's right. However, while everyone knows the sea is blue, what everyone usually sees is a sea that's grey, or dark green. Not this colour. This is virulent!
— The Science of Discworld, Terry Pratchett, Ian Stewart and Jack Cohen.
Advertisement:

In Real Life, you probably would have misgivings about drinking a glass of some blue substance that presumably is clean water, but in drawn media this is just the way it looks (unless it's unsafe for consumption). It's not just large enough bodies of water to show its inherent blue color (see below); someone might as well have spilled dye into the tap water, and even tears are not exempt. It's just easier to animate it this way, and easier for the audience to see.

This trope is near universal in Western Animation. Comic Books and Anime are more varied in this respect, and may even feature both solid blue and colorless, transparent water in the same art style. Generally, only older or cartoon-styled Video Games feature blue water.

It should be noted that water does in fact have an inherent (though faint) blue tint in Real Life; the color just isn't noticeable unless you're looking through a great deal of it. Check The Other Wiki for more info.

Though in cultural/linguistic terms the association of the water with the color blue is not Older Than Dirt per se; the Greeks of Homer's day had no word for blue in their vocabulary, so the sea was called 'wine dark'.

The color of the ocean varies, mostly depending on how close you are to shore (where it's often greenish due to dirt). In the deep ocean, it can genuinely appear a rich navy blue.

Also, some household chemicals are specifically dyed blue to discourage people from drinking them. Blue is most likely used because very few drinks are colored this way.

Aversions include tinging it white instead, or going the whole way and animating it as a distortion of the light. If water is deliberately not blue, however, chances are it's Grimy Water. Any shade of blue fits this trope, though. Compare Fire Is Red, Wind Is Green, and Gold Is Yellow. When this trope and Ice Magic Is Water meet, you often end up with Blue Means Cold. When Water Is Blue meets Water Is Womanly, you get True Blue Femininity.