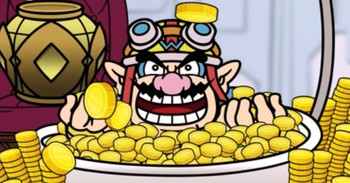 You want yellow? Wario show you yellow! (Note the pot next to Wario which is colored more realistically.)
"Gold is better. I mean, yellow. The poor man's gold."
— Robbaz, My Summer Car - Finland Simulator #19 - House Fire

In real life, gold has an earthy yellow tone. While there are a wide range of different varieties of the color gold, most are unsaturated tones of yellow and orange-yellow, and there are a variety of colors of gold depending on the alloy added such as silver (for white gold or electrum) or copper (for rose gold). But in fiction, it's not always that way.

In illustrated or animated works, "golden" objects are often colored a bright, saturated yellow. There are a few reasons why this may happen. Maybe the creators don't find a realistic golden color snappy or attention-grabbing enough. Maybe gold tones are harder to achieve than simply yellow. Maybe they feel a more realistic tone might be mistaken for bronze or brass. Whatever it may be, expect to see yellow coins, yellow crowns, and other yellow treasures.

Subtrope of Artistic License – Geology and Artistic License – Chemistry. Compare Water Is Blue, Fire Is Red, Wind Is Green, Yellow Earth, Green Earth, All-Natural Gem Polish, and Real Is Brown. Not to be confused with Worthless Yellow Rocks, although the two could overlap.