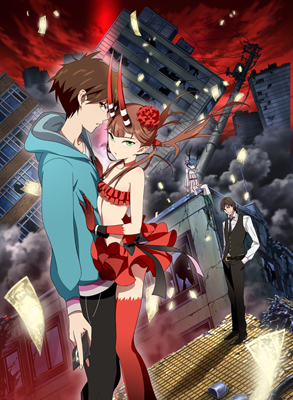 Set in a financially-bankrupt Japan with only the government as a safe employer, [C] - The Money of Soul and Possibility Control ([C] - Control or [C] for short) is an anime about economics, finances and beautiful battles over money ending in private insolvency of the loser. In exchange for a prospective borrower's future (including his prospects, possibilities, lifespan etc.), an organization known as Midas Bank will take him on as an Entrepreneur and lend him a large, zero-interest sum of money under the condition that he participate in weekly "Deals" — battles over each participant's money using familiars called "Assets"—against other Entrepreneurs on an alternate plane called the Financial District.

College sophomore Kimimaro Yoga is sucked into the whole affair when he is approached by the alarmingly eccentric Masakaki from Midas Bank's Commercial Division, who offers him a loan as they need a new Entrepreneur, and Kimimaro needs money. Though he refuses, he is more or less coerced into partaking. Kimimaro quickly piques the interest of and is recruited by Souichirou Mikuni, a powerful and exceedingly wealthy—even by Financial District standards—businessman who leads the Starling Guild, a collective that seeks to minimize any effect the Financial District and its "Midas Money" might inflict on the real world's economy. But when Mikuni executes a plan that risks the future of Japan, Kimimaro is recruited to stop him and preserve the future.

The series is directed by Kenji Nakamura, whose previous projects, Mononoke and Trapeze, should be enough to tell you that Mind Screw and mindbogglingly good-looking scenes await those who take this anime on. Broadcasted as part of the noitaminA block during the Spring 2011 season. It is produced by Tatsunoko Production.

Courtesy of Funimation, subtitled episodes (and a few English-dubbed ones) are available on YouTube and can be viewed here.

Not to be confused with Control, a 2019 videogame by Remedy Entertainment.

Alternative Title(s): C, C The Money And Soul Of Possibility