Literature / How to Train Your Dragon 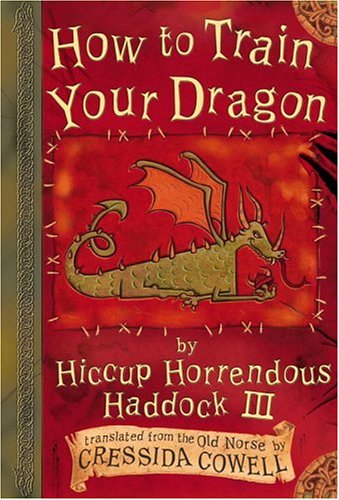 How to Train Your Dragon is a successful, long-running children's book series written and illustrated by Cressida Cowell. It follows the adventures of the son of a Viking chief, Hiccup Horrendous Haddock the Third, as he struggles to keep control of his dragon and become a respected member of the Hairy Hooligan tribe.
Advertisement:

It's got witty humor, Lampshade Hanging, clever dialogue and Parental Bonuses. Thus, teens and adults have found a good read in them.

Hiccup and his father Stoick the Vast actually made their first appearance in a picture book called Hiccup: The Viking Who Was Seasick (1999). It was directed at younger children and did not contain any dragons, though, and is not included in the numbered series. It was later republished as How to Be a Viking.

Book twelve ended the series, and it was released on 8 September 2015. There is also a Spin-Off called How to Train Your Viking, which takes place between the second and third books told in Toothless's point of view.

It was notably given an incredibly successful film adaption by DreamWorks Animation, with ex-Disney animators Chris Sanders and Dean DeBlois (both of Lilo & Stitch fame) at the director's helm, which spawned multiple sequels (also written and directed by DeBlois) and a TV series. However, both the original books and the extended franchise have some noticeable differences. Trope page for the film is here.

Oh, and the audiobooks are narrated by David Tennant.

Characters from the book include:

Tropes for the books include: