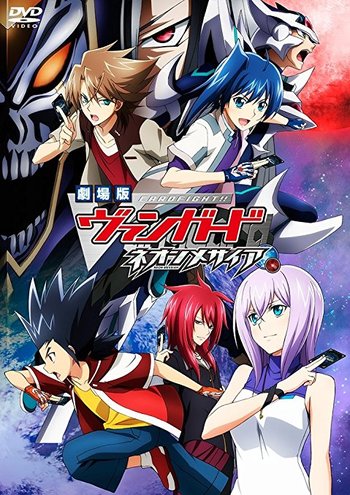 Stand Up! Vanguard!!
Picture it. We're astral bodies that have appeared on Cray, a planet very much like Earth...
Advertisement:

Aichi Sendou is a shy and lonely Ordinary Middle School Student who collects "Cardfight!! Vanguard" cards, a popular Collectible Card Game. One day he meets Toshiki Kai, an experienced Vanguard player who gives him the rare card "Blaster Blade" and encourages Aichi to become a player as well. As Aichi learns the rules of Vanguard and improves his skills, he slowly comes out of his shell and starts to make true friends, all with the goal of one day battling Kai on equal grounds and receiving his recognition.

The original anime aired from January 2011 to April 2012. It was popular enough to earn a second season, Asia Circuit, which aired from April 2012 to January 2013. In this season, Aichi and his teammates receive an invite to the prestigious "Vanguard Fight Circuit", a cross-country tournament pitting the top players of Asia against each other for the ultimate prize. However, there is a darker angle to the competition: the Royal Paladin, Kagero and Shadow Paladin clans have mysteriously disappeared from the world, and only the benefactor of the Vanguard Fight Circuit seems to hold the answers, which he promises to the grand winner.

A third season, Link Joker, began airing in January 2013. It tells the story of Aichi entering high school and forming a "Cardfight Club" with the intention of spreading the game amongst the heavily-conservative academy, despite the opposition of the Absurdly Powerful Student Council. But the story takes a dark turn when an evil force known as "Link Joker" appears and begins to spread like a virus, possessing innocent people and turning them into twisted reflections of their normal selves.

The fourth season, Legion Mate, began airing in March 2014. When Aichi suddenly disappears from the world overnight, Kai realises that he is the only one who remembers the existence of his best friend and rival. Taking up a Royal Paladin deck with the new "Legion" ability, Kai begins his quest to rescue Aichi from whatever fate has befallen him. Standing between him and the truth are the enigmatic "Quatre Knights", a dark counterpart to Team Q4 who seem to safeguard the secrets behind Aichi's disappearance.

The Movie, Neon Messiah, which takes place after Legion Mate, was released in Autumn 2014. When Vanguard cards all over the world turn blank, the cause is traced to Kouji Ibuki: a childhood friend of Kai who now threatens the world itself with his eldritch "Deleter" deck. To stop him, Aichi and Kai must enter the "Messiah Scramble" tournament and win the world-changing "Harmonics Messiah" card before Ibuki can get his hands on it.

Episodes are available subbed on Crunchyroll

(Original and reboot [Barring the first season and the Neon Messiah movie of the original anime]). Dubbed episodes of the second (Asia Circuit), third (Link Joker), and first season of G, as well as both subs and dubs of later seasons are on Youtube

(Barring the fourth season, Legion Mate). Though it should be noted that Legion Mate was skipped over in the dub in favor of G.