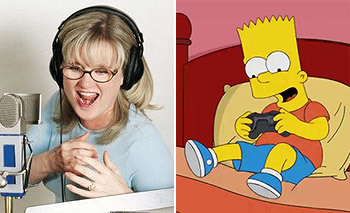 A common example is prepubescent boys being voiced by adult women. This is because, in addition to the usual child labor laws pertaining to young actors, an actual boy's voice is going to break and deepen from puberty sooner or later. It is possible to replace a young male character's voice actor once he ages out of the role, but it is more economical to cast a single grown woman for the entire series. Alternatively, if a male child is in a cartoon as a one-off, it is easier to have a main female cast member provide the voice rather than going through the trouble of finding a child who can do it. You're more likely to see Children Voicing Children in movies or guest appearances as opposed to regular characters in a series that lasts several years.

Please do not list "retroactive" examples of transgender actors who performed characters of their biological sex before they transitioned some point post-production. This trope requires the casting to be an intentional decision. The fact that an actor no longer corresponds to the gender of a character they played is irrelevant to the work itself, and doesn't change the fact that they were considered by the world at large to be of the same gender of the character when they played them.

The live-action equivalent is Crosscast Role.

In Mechamato's English version, Katherine Clare Clavalo voices both Mara and Pian, the latter being a case of Cross-Dressing Voices.

Example of:
Talking to Himself

In Mechamato's English version, Katherine Clare Clavalo voices both Mara and Pian, the latter being a case of Cross-Dressing Voices.