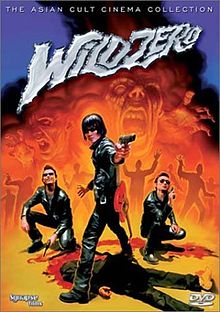 Wild Zero is a... bizarre film from 2000, starring, and with the major involvement of, cult hero J-rockers Guitar Wolf (its members being Guitar Wolf, Bass Wolf and Drum Wolf). It follows Ace, a biker who sees the eponymous band live just before the Zombie Apocalypse.