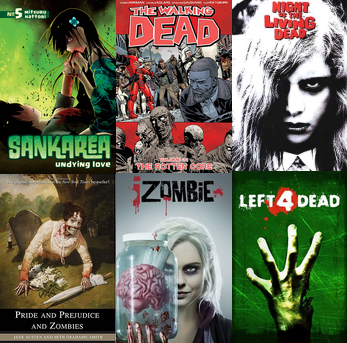 "The abundance of zombie media serves as a key indication of what the future will be like."
— Grayson Hild, The way we will be 50 years from today: Zombies

The works in this index want your braaaiiinnns...

Just like Ghost Fiction, Mummy Media, Vampire Fiction, Werewolf Works, and Witch Works, this page is an index for all works where primary focus is on zombies. Naturally, all zombies are different (though most will agree that Everything's Deader with Zombies). Title of the Dead is a frequent occurence.

No you silly, this index is not about stories (or songs) by zombies. Most Writers Are Human, after all.