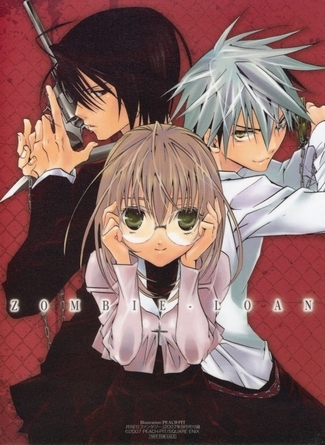 Zombie Loan is a manga and 11-Episode Anime series by Peach-Pit (of Rozen Maiden, Shugo Chara! and DearS fame). The manga was serialized in Monthly G Fantasy from 2002 to 2011, and the anime adaptation aired in 2007.

Michiru Kita is an orphaned girl living with her aunt and uncle. She is pretty much normal other than the fact that she possesses "Shinigami Eyes", meaning that, without her glasses, she can see rings around people's necks that show how much time they have before dying.

One day, she meets Chika Akatsuki and Shito Tachibana, two survivors of a horrible bus accident in the middle of a Zombie Hunt, and learns the horrible truth about them — they're already dead, and only alive through a "Z Loan" that they seek to pay off by hunting Zombies who are alive illegally. Michiru ends up unceremoniously dragged along in exchange for her life and the use of her eyes to find the already dead.