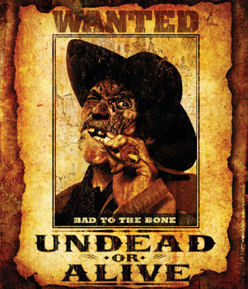 "The most legendary defender of Native American sovereignty was the Apache warrior and medicine man, Geronimo. Renowned for bravery in the face of overwhelming odds, Geronimo was credited with supernatural abilities. After many years of guerilla war, he was finally cornered by the US Army. Don't worry, the part where you have to read is almost over. Geronimo's final act was making the secret medicine known as the 'White Man's Curse'... Okay, it's over."
— Title Sequence
Advertisement:

A curse is spreading across the Old West, one that makes its victims hunger for human flesh while their own rots from their bones. When Elmer Winslow, a U.S. Army deserter, and an effeminate cowboy named Luke Bed get into a bar fight, they are soon after tossed into a jail cell by the town's corrupt Sheriff Claypool, who takes the liberty of claiming all their personal possessions for himself. Their cell is next to that of Ben Goodman, a sickly looking man who is set to hang the following day for the ghastly crimes of murdering his wife and daughter, devouring parts of their brains in the process. When Elmer and Luke make their escape, relieving the sheriff of their money and much of his own his entire savings before fleeing town, both Claypool and his dim-witted lackey, Cletus, are bitten by Ben.

Elmer and Luke make haste to put the town behind him, certain that the enraged sheriff will be hot on their heels. The next day they are ambushed by Sue, the niece of the infamous Geronimo, who after hearing their story reluctantly agrees to help them escape in exchange for information on the whereabouts of the U.S. Army battalion that killed her uncle, on whom she's sworn her revenge. Soon the new-found companions discover that they are in far greater trouble than they thought, as the sheriff, Cletus, and their entire posse all have the same curse that drove Ben to kill his family.

Pursued by the Army, Sheriff Claypool, and his posse of hungry zombies, the unlikely trio must work together to stay alive while making a mad dash for the Colorado River.

Undead or Alive is a comedy western written and directed by Glasgow Phillips. Released on DVD in 2007 by Image Entertainment, the film stars Chris Kattan, James Denton, and Navi Rawat.

Undead or Alive contains examples of: