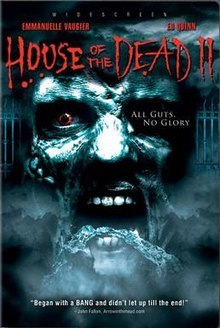 A 2005 Made-for-TV Movie sequel to House of the Dead starring Emmanuelle Vaugier, Ed Quinn, Sticky Fingaz, and Sid Haig, that was released on Sci-Fi Channel. Plotwise it is closer to the original game than the first movie was, but that's not saying much.

This sequel provides the examples of: